It has been a long time since I complained about traffic here on the blog (I still do it all the time to everyone in real life, I am not reformed).  What used to be a mainstay staple topic was bumped to "new day, same refrain" status and I decided to give it a rest (here, on the blog).

A lot has happened in the land of my commute. I now have to navigate an ever changing, years spanning, road construction project that makes me want to pull my hair out and gives my middle fingers awesome exercise.  I'm fairly certain that the Minnesota Department of Transportation (MNDOT) knew that this was going to far on their part and as an apology to me (personally) created the Zipper Merge Campaign.

There is a logo, webpage, new signs, and even some video's on YouTube... please feel free to share them with your friends & family.  Sadly not enough people are catching on to the rules, I know this because I am on Facebook and recently had the super fun pleasure of being indirectly "scolded" by an idiot (who is no longer my friend on Facebook due to the post stupid crap repeatedly be unfriended rule) for following the zipper merge rules. 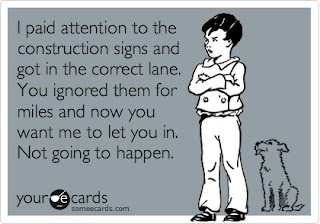 To every person that feels the need to go over and above in the category of Minnesota nice by merging into the non-closed lane miles and miles ahead I would like to thank you.  I will get in, I always do, and you have just made my travel time much faster.

EXCEPT for mornings like today because we are currently in the midst of a Tsnownami (not really) (well there is a lot of snow but because we live in the upper midwest where people mistakenly believe it snows almost every day year round we don't get a lot of snow press) (a lot of schools are closed which made my commute easier so thank you to whichever school started the metro school closing trend).

This morning I left the house late because I wasted some time watching the tv scroll trying to see if St. High School was the only school that closed in our area (it wasn't) but figured I would be forgiven if I was tardy to my desk due to the roads.  For the most part the roads were in horrible shape if you don't drive an appropriately appointed SUV.  I drive an appropriately appointed SUV so I was somewhat happily (I was headed to work when i would much rather be sleeping) tooling along confident in my machine and my abilities until I came face to face with the rest of the world.
But, the cherry on top of todays snow commute was the male driver of the Ford F250 with a plow on it. Straddling 2 lanes, and going between 15 and 20 mph, two neat lines of traffic had formed behind him. I was stuck in one of those lines.

Apparently he did not have the confidence in his machine or his skills to maneuver his gas guzzler and plow into a single lane.  It is either that, or he has a wee little prick and was trying to make up for it with the size of his truck and plow and being a general ass hole.

I'm guessing it's both.
blathered by Cursing Mama at 1:56 PM

Zipper merge! Only in MN would the DOT come up with such a catchy campaign.

LOL! I do wonder if those people going a mile an hour make it to work before it's time for them to turn around and go home.