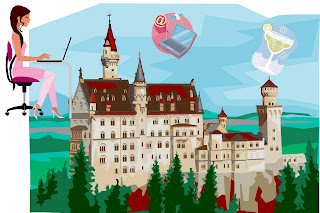 Note: the benevolent leader wears cute pink clothes
and rules all the margaritas as well

The other day, completely out of left field (while in a group of people whom I was not comfortable revealing the extent of my vast internet empire to) the following took place:

Gameboy: Mom
CursingMama: Fiddling with itouch game called Unblockme free which flummoxes me mightily. I am not a great puzzle solver, or maze runner.

Gameboy: Do you Twitter?
CursingMama: What?
(fine, it was a stalling technique)

Gameboy: Do. You. TW IT TER ?
(condescending little fuck don't you think?)
(probably learned it from his father, his mother would never speak to anyone in that manner.)

CursingMama: No, Do You?
(liar, liar, pants on fire)

Gameboy: Eerily silent
CursingMama: goes back to mastering Unblockme making mental note to scour Twitter for son.
blathered by Cursing Mama at 6:00 AM

P.S.: My word verification contains the word "wine". Don't mind if I do.

The demographics of Twitter users predict that Gameboy will not stick around long. His age group prefers texting and Facebook. Twitterers are predominantly >30.

What Chris said. That's what I was thinking. Could you have put something out there that outed you?

Uh oh. Methinks he busted you.