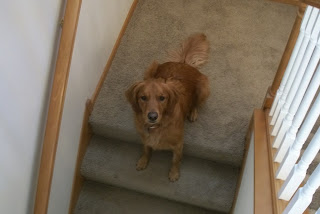 So - I posted about my fear of possibly being the subject of an April Fools joke and then I thought of all my other fears.. and I thought I should consider sharing some more; that were related to Friday only.
I have a fear of Dog Poop. Not a handy fear to have when one is the proud owner of a rather large dog. I should probably explain this more fully, because I'm fine with the poopin' and the scoopin' as long as it's going on in the out of doors... its the possibility of poopin' in my house that leaves me with terror. More explanation is needed...Scooter is a pretty regular guy... we know when to expect him to ummm....poop (I really pondered all the ways to say that and I decided that term was the least offensive and graphic - you are welcome)... FINE...drop some kids off at the pool but hes a dog so he's dropping them off at the park. Anyway - despite his schedule he is easily thrown off if in the act of finding the right place to ... park.. he gets distracted. ANYTHING can distract him, birds chirping, a school bus, wind, my futzing with the leash, air. So, when he gets distracted in the morning and does not make his scheduled delivery and I know that there will be nobody home to bring him out to try and make that delivery I FEAR all day long that he's going to deliver on the living room carpet.
I have a fear of Baseballs. I think at some point we established that I'm not super coordinated and as a result have been hit in the head multiple times in so called sporting contests with white balls. Naturally I am now afraid of white balls (Remember I have to tell you the story of the time Mr. Motorcycle announced that I was afraid of white balls and my girl friend who bats for the same team as Mr.M. told him to watch his back! Oh... kinda told it). I have no problem sorta playing games that involve these things.. but most of my ball (sports kind) activity is rooting from the sidelines. EXCEPT Baseball. Don't like it, never have...thought I never would. (the season of baseball that Gameboy played nearly killed me) And then... I decided on Friday afternoon that I might be up for watching the Twins Home Opener....No Idea Why. It took some searching, but I finally found the game on a channel way up in the 600's (I never get past the low 300's) and sat down with a glass of wine & a bowl of cereal to watch...
This is where Mr.Motorcycle gets scared. I can be a bit obsessive when it comes to watching sports, if I happen to become enamored with a sport there is a good chance I will become obsessive about watching it (see Timberwolves Kevin Garnett Era - or MN Vikings All Era's - or Gopher Hockey pre-wedding era) (there are more, that's just a sampling)
I was less than impressed... all the standing around doing nothing drives me a wee bit insane. I like a lot of movement and I really like it when people run into each other; neither of those things happened so I changed the channel.
This does not mean that I was not subjected to an April Fools Joke... nope, we have Gameboy coming in at the tail end of the evening with a whopper. Although he (a) is very good directionally and (b) has a gps device for his car - Friday found him in an area of the cities he is neither familiar with and without his gps because that is exactly the kind of thing he takes out of the car for no good reason. (see teenage boy - lack of common sense). To ensure he was going where he needed to go he called me, I gave him very good directions for main freeways (I494 East - turns magically into I694 at I94 interchange - stay on I694 until you know where you are at!) and was sure that he would eventually arrive home safely. As the evening passed I didn't really think to much about it, after all Gameboy is technically an adult (in only the technical sense) so he can pretty much do what he wants when he wants as long as it is legal and doesn't disturb my sleep (basic rule of living at home).
Then the phone rang...
Gameboy: I don't know what happened, but I'm halfway to Duluth!
You can see where this is going - you know that I'm about to be Punk'd - I however had totally forgotten that Gameboy has been diligently studying at the feet of Ashton Kutcher for some time.....
Cursingmama: What?!?! Turn around!!! Whats your closest exit. I'm not paying for your lost gas for stupidity and not reading signs! GAH! BLARP! SUGAR!
Gameboy: April Fools! I'm in the driveway!
If he hadn't gotten in the house so damn fast I would have changed all the locks.
blathered by Cursing Mama at 12:57 PM

You almost made it safely through the whole day, too.

I'd change the locks anyway, just to make the point.

Game Boy is a PUNK! And Phew, That was close, I almost thought I was going to be subjected to having to watch two teams take a field and stand there watching, waiting, and watching, and waiting for Something to happen, Anything to happen. Possibly one guy to throw a ball and hope the other guy misses it. Baseball... YUCK!