liars, half-truths, and lying all in a weeks work 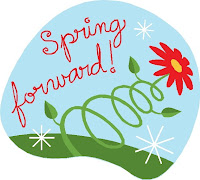 Last week I received all sorts of emails and reminders and notices from Widget Corporate about daylight savings time beginning.. most involved the term "Spring" It's been 5 days since I set all the clocks ahead an hour and I'm still dragging my back end around confused, eating at weird times, and I'm later than normal for everything. I didn't spring.. I'm stumbling & staggering into spring like I've been mainlining margarita's since sometime last Saturday afternoon.
There is no spring in my step.
Actually that isn't entirely true, the weather has been fantastic here & there over the last week. Sunny, warm for March in Minnesota and THAT makes me feel fantastically springy. So springy I actually left the house without a coat twice.
ThePrincess came off pretty lucky in this whole Spring Ahead nonsense... she is on spring break and other than having to put up with Mr.M and I nagging at her for all of the laying about and sleeping she has not had to do a lot of schedule adjustment this week. She is not springy by any means, but she is not stumbling & staggering either.
She remains late to everything however, but no later than usual.
In celebration of a week of no school (although not no homework - which is a topic for another post) ThePrincess hosted a gathering of teen girls at our house for something they claim was a slumber party. As far as I can ascertain the pop and candy fueled event was heavy on the party but very light on the slumber. When I woke at 5:15 am for a trip to the bathroom...they were all still up...when I passed by at 7:00 am on my way out for work they were silent.
I suspect the gummy bear high wore off sometime around 6AM.
The weather forecast for the weekend is pretty favorable... reasonable temps, a little sunshine.... but I don't think it's accurate. The arthritis is flaring today and there are only 2 things that make it this bad:
1.) Changes in the weather
2.) Eating too much salt
There is no way I ate too many potato chips last night...

Okay, that might not be entirely true. I may have partaken in several potato chips in conjunction with my green drink. Not being a big beer lover I chose to go with the time tested Margarita. There are rumors that despite being heavily descended from German & Swedish ethnic backgrounds that one side (the Germans) were not particularly opposed to crossing cultural/national barriers when procreating so I may be slightly Irish. So I felt like I had to do SOMETHING to celebrate St. Patrick. The sacrifices I make for my heritage!
I have been able to verify that I am slightly French and for reasons that I can not name this makes me STUPID happy.
For Old Times Sake - Lets Quiz!
What's Your Lucky Charm?
How Lucky Are You?
Maybe if I buy Bamboo at Ikea this weekend I'll get Lucky!
blathered by Cursing Mama at 10:39 AM

Email ThisBlogThis!Share to TwitterShare to FacebookShare to Pinterest
Labels: Fluff

I see little rainclouds from tomorrow night through Sunday night in my ForecastFox bar...