When I began pondering the idea of a column I never thought that this is how I would begin. I really thought that I'd start off with something less emotional, less heartbreaking, with fewer tears and certainly a happy or at least satisfying ending. Unfortunately, every time I sit down with the intention to write about the other things that present themselves I know that I am ignoring that which shouldn't, couldn't be ignored.

Sometime ago I developed a habit of playing with my earrings; I suspect it started when ThePrincess had her ears pierced (like 9 years ago) and we used to twist them together for better healing or why ever it is they tell you to twist them. At any rate, I am an earring fiddler.

Several weeks ago while driving across town to retrieve a child from some child activity I reached for my left ear out of habit and realized that I had no earring, I immediately felt my right ear and discovered that I hadn't just forgotten to put some in my, left earring was missing. I was heartsick, a gift from Mr.Motorcycle for Christmas several years ago, these diamond studs were the perfect, go anywhere, just right for me earrings.

Of course I felt around in my hair, on my coat, I even checked the seats of the car when I got a chance, but the earring was not to be found. That didn't stop me from continually reaching for the ear, and getting the sharp reminder that I had lost something I treasured. 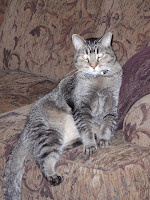 The last time I had to write an emotionally painful post I called on the Official Blog Spokescat to fill in and release the news, but this time even Jack is sad. You see, losing that precious, treasured jewel was nothing compared to what else was lost that weekend and like my repeated attempts to fiddle with my earring not a day has gone by without a jarring reminder of what is really gone.

It is with my heart in my throat and tears in my eyes that I must tell you about the passing of the dearest, sweetest, best dog in the world.

Even though Harley was with us for less than a year our love for him feels like a lifetime, he was that special. He did a wonderful job of making himself at home in the hearts of everyone he met and even though we've had a few weeks of healing time there is still a giant hole where Harley used to sit.

I miss so much about him the thought of trying to put into words what we've lost is overwhelming, but a memorial needs to include as many special moments as possible and that is what I'm going to try to do.

I said he had personality,

I miss the thump of his tail when I walk past the places where he used to wait for us to come and pet him.

I miss his enthusiastic greeting every time I come in the house, and how excited he was to see me even if I'd only been out for a minute.

I miss watching him throw his ball up in the air to catch it over and over; I miss stepping on his beloved duck toy, listening to it quack, and having him race to it so I stop playing with it. 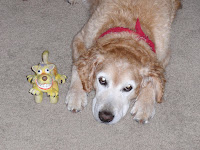 He LOVED his toys - but balls, particularly a little orange squeaky basketball looking thing, were his favorite. He tolerated toy stealing by Jack, and never once when Benny scolded him for squeaking that basketball too much (by whopping Harley in the head with his thankfully claw free paw) did he give Benny a piece of his mind.

I miss hearing about his daily adventures, the walks he took Mr. Motorcycle on, the parks they visited, and the places he saw from his perch in the back seat of the car. 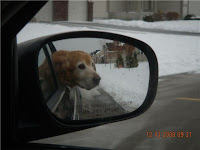 He loved to ride in the car with his head out the window, even when it was below zero. Mr. Motorcycle made sure he got as many car rides as possible.

I miss being asked if he can go with every single time I pick up my car keys and put on my shoes.

I miss his excitement when we head outside to do chores. I miss his positive reaction to his leash and I can't believe I won't get to take him for another walk in the snow.

He loved to play in the snow, it may have been partly because he looked so good in his boots. I liked the way he pranced in them.

I'll miss seeing him get antsy when we pack to go to the cabin, whispering the word "cabin" because he knew what it meant.

And include a lot time hanging out at the lake

I miss that he ignored the turkeys in our the backyard but thought the deer were his mortal enemy. Well, deer and people on bicycles.

This is how he felt about people on bicycles when seen from the back seat. 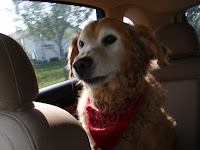 He was always ready to have his belly rubbed -

and he had no shame when it came to his larger than life, louder than a trombone, stinkier than a manure farm (or skunk) farts. 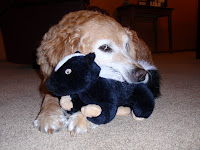 I still reach over the side of the chair to rub his velvety soft ears while I read, I miss him telling me it's time for petting with a gentle nudge, and I still check to make sure he isn't sitting on the floor under my feet before I climb out of the couch. 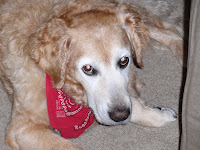 We loved him fiercely and miss him like I just can't describe.

Good-bye dear, sweet, puppy. You will never be forgotten. 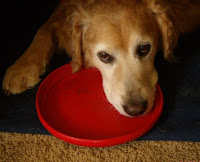 blathered by Cursing Mama at 6:12 AM

Email ThisBlogThis!Share to TwitterShare to FacebookShare to Pinterest
Labels: dogantics

Oh, no no no--I am SO sorry. So sad, So happy that Harley had a good life with you. But so sad he didn't get to enjoy more of it.

I am so sad for you.

Please call, text, email if there is anything I can do.

My heart breaks for you all.

I'm so sorry. He was a handsome guy.

Oh, honey, I am so sorry! You guys gave him his happiest days. Please call or email if you need anything, even just to vent.

My thoughts are with you. It is so sad and I know the hole he has left is much bigger than his physical being. I'm so sorry for your loss.

damn. I'm so sorry, CM. I wish I could help. What a loss he was but what a wonderful life you provided him! I'm so happy that he had all of you!

Oh, I am so very sorry. :( You gave him a great final year of his life at least!

Soooo not fair for you.

For Harley? What better place to end his days - I'm sure his heaven is very similar to his last year on earth (except for the deer and the bicycles, of course).

Oh, I am so sorry. He did have a great last year, though, didn't he? Luckiest dog on the planet. Isn't it curious how something so big can worm its way into the deepest corner of our hearts?

There are no words that can even begin to express how sorry I am. There is nothing quite like A Very Good Dog. And nothing that can fill the hole in the heart they leave behind. He was loved and gave back tenfold. You were both so lucky to have found each other. ::hugs::

I'm so sorry. Pets are such a joy and it's heartbreaking to lose one. Lots of internet {{hugs}}.

He was the best. I miss him dearly:(

Oh, no. I am so sorry for your loss. It's been three years since we lost Barkley, and I still miss him every day.

I'm so sorry. They do worm their way into our hearts very quickly, don't they?

I'm so so sorry for your loss. Harley was one lucky dog to have had you even if for such a short time.
{{Hugs}}

I am so very sorry. :( I know you guys loved him so much. What a great doggie.

I am so sorry. He was a beautiful puppy and just looking at his pictures makes me want to pet him.